With a range of medias for varied applications, Aquastream design engineers are trained in all facets of filtration applications. From initial costings and layouts, P&ID specification and right through the installation & Commissioning phases, we assist engineers and end users achieve stringent water quality targets efficiently and cost-effectively.

The primary functions of activated carbon are the removal of chlorine, volatile organic compounds (VOCs), chlorinated hydrocarbons and organic impurities.

Aquastream Water Solutions can help you size your system, supply you with the right Valve and Vessel in kit form and can also offer assembly and installation if required.

Chose from timer based regeneration to fully automatic regeneration which eliminates the need for regular servicing and there are no filter cartridges to replace.

Many Water Treatment processes rely on media filtration to remove solids from the  water.

Our team at Aquastream can help you design, size, manufacture and assemble the right system for your application. Whether single or multi-vessel design, small or large, we have the ability to deliver the right product.

We can also help you with pump sizing, post and pre-treatment knowledge and other information

For removal of suspended solids under 5 Micron 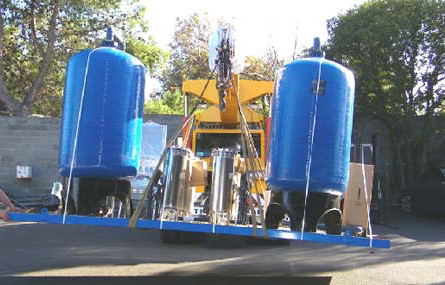 Iron Removal Systems are designed to reduce the level of iron, manganese, hydrogen and sediment through an ion exchange process. Iron levels up to 28ppm are treatable.

These systems are available with 3/4" up to 6"connections with manual, semi auto and fully automatic regeneration clocks. Enjoy the benefits of water free from rust, stains and metallic tastes.

Suitable for whole of house filtration and commercial & industrial applications.

Valves are used in conjunction with FRP Vessel filtration systems including Multi-media Filters and Softeners and De-ionisers. These valves direct the flow of water through the filter system to provide backwashing of the media.

Aquastream stocks a large range of Autotrol and Fleck valves.

These valves can be mounted on top of the vessel and also side mounted where space is an issue. We can help you choose the correct valve for your application and supply you with all the accessories to suit. Please call 1800 446 500 to speak to one of our trained staff.

Autotrol Valves are one of the leading brands on the market.  These valves are suitable for use in many water treatment applications including Media Filtration, Softening systems, de-ionising systems and more....

Supplied in 25 kg bags, this range of activated carbon is one of the only low-cost methods of removing low-molecular weight organic compounds. This Carbon is intended for general chlorine and organic removal.

As all applications are unique, please call our team of experienced consultants on - 1800 446 500

A revolution in filtration performance and operating economy.

nextSand™ is a remarkable advance in media filtration technology. Based on a rare natural mineral that is highly processed and refined, nextSand™unique properties allow it to radically alter the performance and cost of media filtration. The hardness, stability and micro-porous character of nextsand™ makes it a perfect filtration media for virtually every application in the water and wastewater treatment industry

AFM is an Activated Filter Media, manufactured and activated by Dryden Aqua under ISO procedures to have a high negative Zeta potential and catalytic self-sterilising properties. AFM is manufactured from reprocessed glass, but it is not a basic crushed glass filter media. AFM is a highly processed product which has been tested by independent UK Government laboratories and the water industry and has been certified as safe to use for all water filtration applications. FIlter sand has by-passed the regulations because it was in use before the regulations were in place. However man-made filtration products are not exempt, and AFM is the only filtration media that is in compliance with the regulations and is safe to use for applications such as drinking water, swimming pools and aquaria. A basic crushed glass product does not have the surface active properties, there will be a hydraulic lense effect which leads to channelling, there are also serious health implications for the public and contractors from using a basic crushed glass product.

The surface of AFM exhibits catalytic activity in the presence of oxygen. A proportion of the dissolved oxygen molecules are disassociated on the surface of AFM which increases the oxidation potential of the media. The surface of AFM is therefore is self-sterilising. The zeta potential generates a high charge density, which attracts positively charged particles, but at the same time the slip zone prevents the particles from reaching the surface of the media. AFM therefore attracts solids, and holds on to them, but they are prevented from bonding to the surface. The self cleaning properties mean that the media is just as effective in treating waste water such as sewage effluent as it is in treating clean water because the media does not become biofouled.

Up to 80% better performance than sand